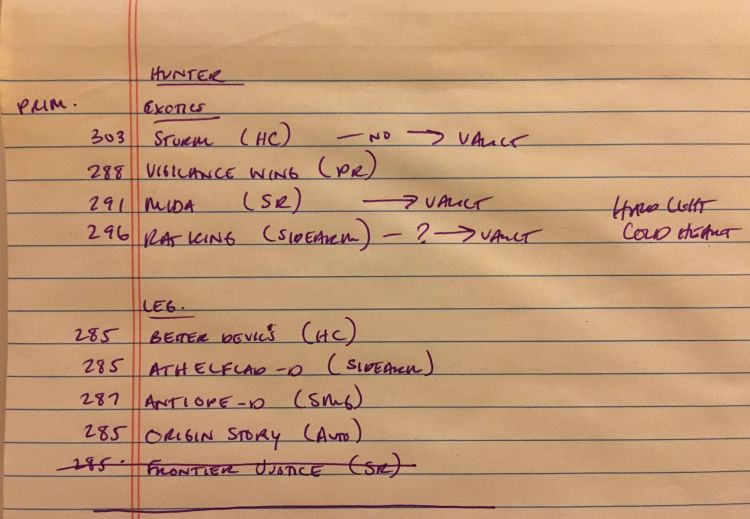 What you are looking at is an extension of my Destiny 2 madness: the first half of the first page of a four page list of weapons (including name, type, and current light level). I have them broken down by character. I started with my main (my Hunter) listing weapons by type: exotics then legendaries. I eventually worked my way down to different Ghost shells.

I did this because my vault is already bursting with weapons I’ve been saving for my Warlock and Titan. I didn’t want to accidentally delete anything, so I thought the list would help me make sure I knew exactly which character had what.

And yes, that’s my handwriting. That’s me trying laughably hard to be legible.

I actually didn’t play any Destiny on Thursday or Friday (weirdly), so I made sure to hit it as hard as I could on Saturday and Sunday. I notice that I’m less and less fond of the four person Crucible teams, and even less fond of being forced into one of the two playlists where you can’t even choose which mode you want to play. I also made sure not to play Trials as I’m terrible at it and it makes me unspeakably grumpy. I know I didn’t start playing online multiplayer games until I was in my 30s, but holy heck, some people are so fast, I just can’t compete. I do try, though.

After plodding through the weekly Crucible challenge, Shaxx actually gave me something wonderful (a definite change for him): a really keen sword. I exclaimed out loud several times because I was so happy that I didn’t get yet another useless reward. I mean, sure the exotic engram I’d gotten during my many Crucible matches decrypted to yet another duplicate, but the sword more than made up for it.

I was one pleased Guardian.

This week I see much more Destiny 2 in my future (shocking, I’m sure). I also have a couple other things on my radar.

I have commenced decorating for Halloween/autumn and already the space feels exponentially cozier (photos to follow upon the completion of decorating). This week my goal is to get the lights and other things up and then see how everything looks. If it looks like it needs a little more, then more will happen! I have the strange urge to make a bunch of God’s eyes, so I will probably do that in all sorts of autumn colors.

And, while I watch many horror movies year-round, I am super behind on some of my newer acquisitions. I’m going to try to catch up this week, so that means I have a ton of horror movies on deck including: The Autopsy of Jane Doe, The Bye-Bye Man, A Dark Song, Don’t Knock Twice, Elle, The Final Girls, The Hatred, Raw, Rings, and so many others. I’m pretty excited to finally put them on and catch up. I do love horror movies and I have yet to watch any of those titles.

With all the Destiny 2, decorating, and horror movie-ing, I don’t know how much else I can cram in this week. I’d love to try playing something in addition to all this, but I don’t see it happening. I’ve been itching to play Hellblade: Senua’s Sacrifice so I might see if I can squeeze a little of that in.

What are you hoping to play this week?