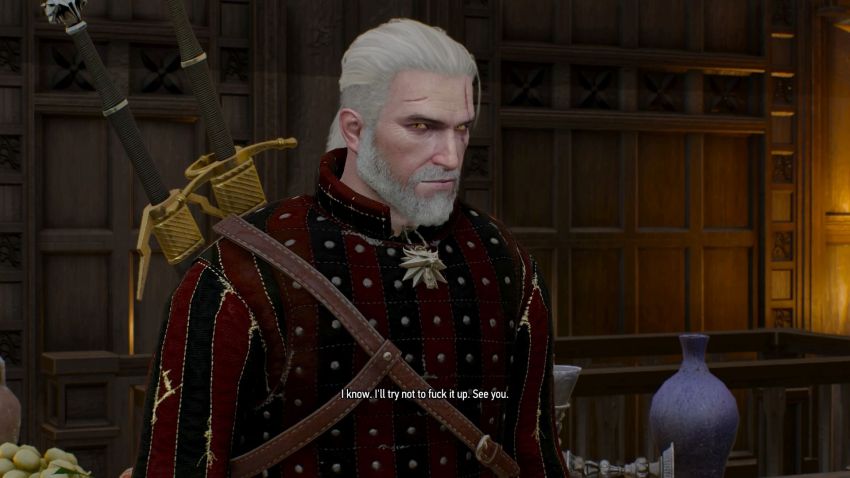 As I sit here to write this, somewhere in the world David Cage is unspeakably happy and doesn’t know why. You’re welcome, you talented weirdo.

When I started playing The Witcher 3: Wild Hunt, I was aware there were “romance options.” I am not a romantic person in real life. I don’t care for romantic comedies, I don’t go all in for things like fancy dinners or wooing or any of that. When sticky sweet moments come up in a movie or TV show I’m watching, I often say “Barfff…” before I can control myself.

I’m just not a romantic person.

That being said, when I was initially flipping through my Witcher strategy guide, I happened to see a page dedicated to all the ladies Geralt can…”romance” in your playthrough. I had no idea that CD Projekt Red provided so many chances for Geralt to blow off steam with the ladies. 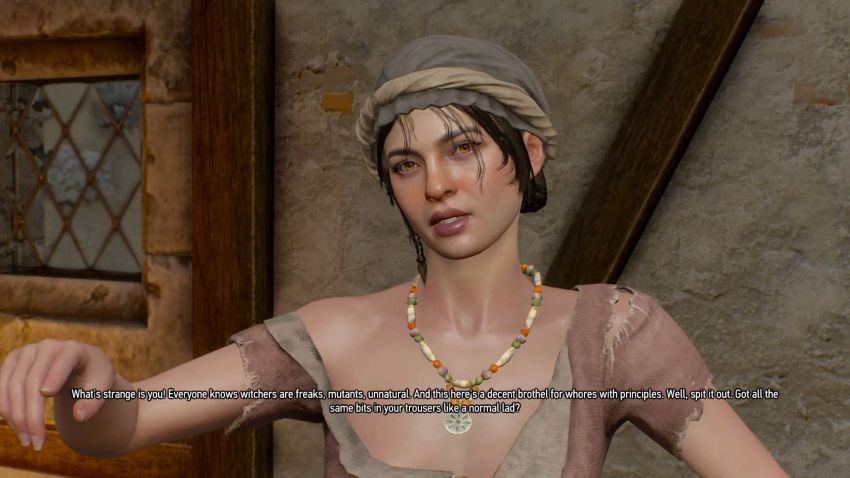 The more I came across ladies like this peach (above), I knew I’d have to be careful not to step on any toes in my playthrough. I knew there was a love triangle between Geralt, Yennifer, and Triss, but I also knew I could make matters worse by certain actions I might take.

I wanted to be careful. 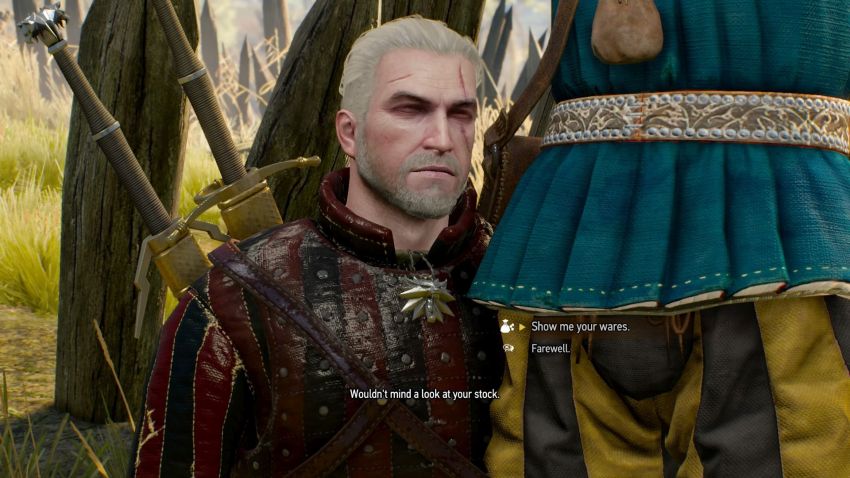 (Speaking of perversion, every time I see and hear the above line, it makes me snicker. Add to that that this particular merchant was glitching out all over my screen and Geralt was eyeing his crotch region. I was beside myself in amusement.)

My first brush with potential sexual weirdness was with Kiera Metz: 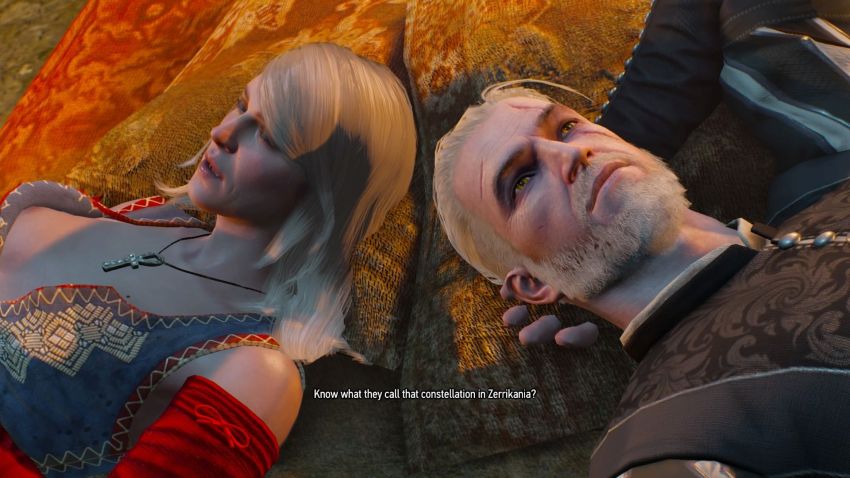 She asked me out to a friendly dinner in thanks for something I’d done, and I was up front with her when I accepted the invitation; this was strictly as friends. Even so, she tried to seduce me, and I had to turn her down. We ended up lying on a blanket in the forest looking at the stars and then she ditched me.

Which was honestly fine with me. Geralt had enough going on; he didn’t need the complications of that lady.

But this was the first of many “opportunities” for Geralt to “express” himself physically with the digital ladies. Early on I had decided Geralt would abstain. Here’s why: he is in an impossible situation. He was with Yennifer for who knows how long. He somehow got lost and developed amnesia (color me shocked). During that tricky bout of mind-wipe, he meets Triss, and they form a relationship. When he gets his memory back (all this happens prior to the timeline of this game), let’s be honest, he is screwed. There’s no possible way that anyone gets out of this happy. Yennifer is moderately understanding, but understandably frustrated. Triss is also those things. No matter which woman Geralt chooses, I fear it won’t end well.

So, I made the call right off the bat: no sexy time for Geralt. His abstinence would be tactical.

Don’t get me wrong, I am by no means a prude; my choice to make Geralt chaste was a practical one. It seemed the nobler stance to just keep his digital physicality in check. And I felt good with deciding that from the outset.

Then, I chose what I thought was a fairly innocent dialog option and this happened: 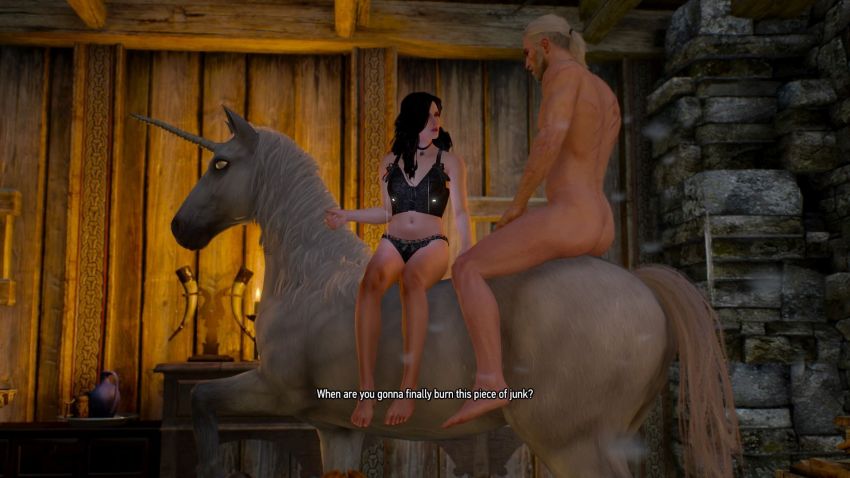 I was actually saying at the screen, “Geralt! What are you doing!? GET DOWN FROM THERE IMMEDIATELY! DO NOT F*CK ON A UNICORN! DO NOT CHEW HER UNDERPANTS OFF!! STOP THAT RIGHT NOW!!! GERRRRRRRRRAAAAAAAAALLLLLLLLLTTTTTTTTT!!!!!!!!!”

Alas. To no avail.

They super f*cked on that unicorn.

I was then “treated” to an uncomfortable digital sex scene with the most awkward polygonal kissing. I was mildly mortified.

I’m not against sex. I’m just not into sex in video games. Maybe it’s just never been done in a way that I found convincing, but I always find it cringe-worthy. If I wanted to watch people have sex, I’d do that. But having it come up in games always feels a few shades away from realism…even if the rest of the game has been believable (you know, in a video game way).

David Cage seems to be a huge fan of the awkward sex scene, what with Heavy Rain and such. Not to be inappropriate, but, in reality, sex can be super awkward (and sort of hilariously so). In games, you have the added knowledge that someone (or a whole team of folks) had to render what you are seeing on the screen, and in a recording booth, some people had to make all kinds of interesting sounds to create what you are hearing.

It’s both extremely funny, as well as something I just shake my head at.

This isn’t a criticism. I’m sure there are people out there who love sex in video games; more power to them. I’m just not one of them. It always feels off to me. I’ve no better way to explain it.

So, with that being said, I now find myself in a playthrough of The Witcher 3 that includes my abstinence from all other ladies, with my apparent allegiance to Yennifer and her sexual unicorn.

It’s not what I had in mind.

Geralt. I want you to think about what you’ve done. 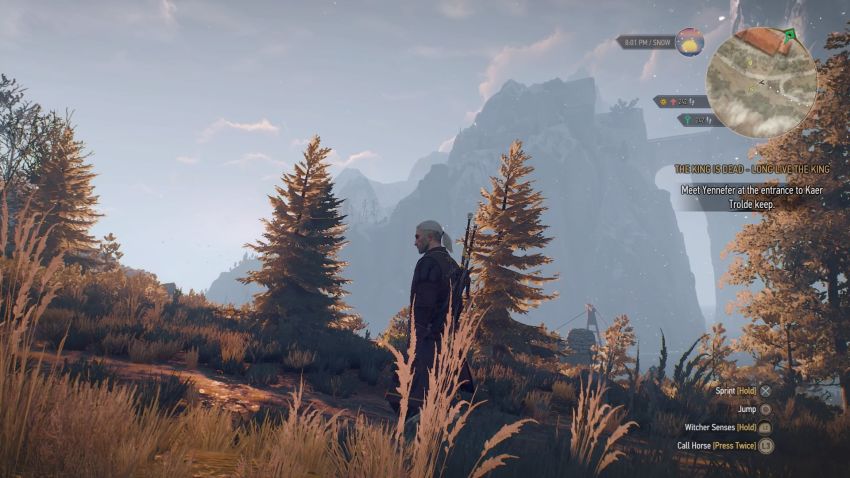 How do you feel about sex in video games? Are you pro, con, or do you vacillate depending on the game?