This week I’ve had a Witcher 3 theme going and I thought I’d round out the week with some in-game silliness that rarely gets old for me: glitches.

I’m a huge fan of silly glitches in games (land sharks, anyone?), so long as they don’t negatively impact gameplay. These batch of glitches left frustrations in the dust and caused me only giggles.

The image above is one of my favorite glitches. Every time Geralt says the line shown in the subtitle, it makes me snicker like a 12 year old anyway. Add to that that this particular merchant was glitching all over the place every time I tried to buy from him and, in this case, I ended up awkwardly staring at his crotch while saying that line.

Behold! The great floating bow! And it wasn’t even magic. Curious. 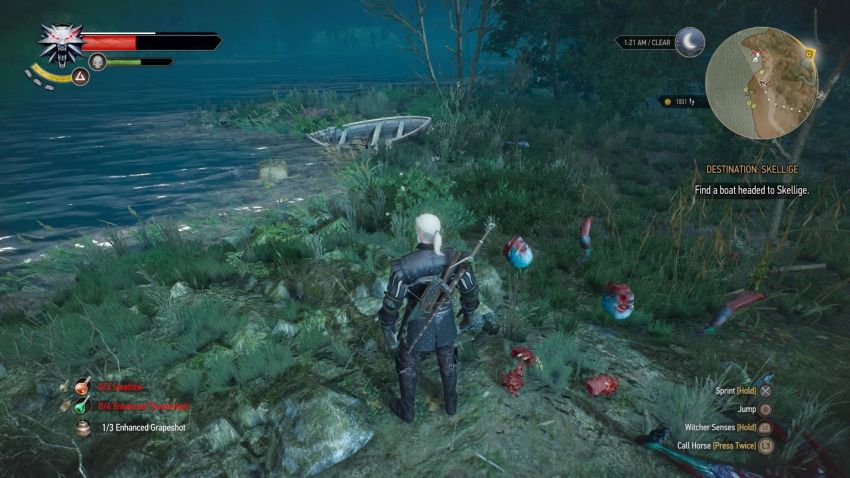 It’s a bit hard to tell, but those monster heads are floating in midair. The best part was when I accidentally walked into one and it fell to the ground.

Better late than never, I suppose. 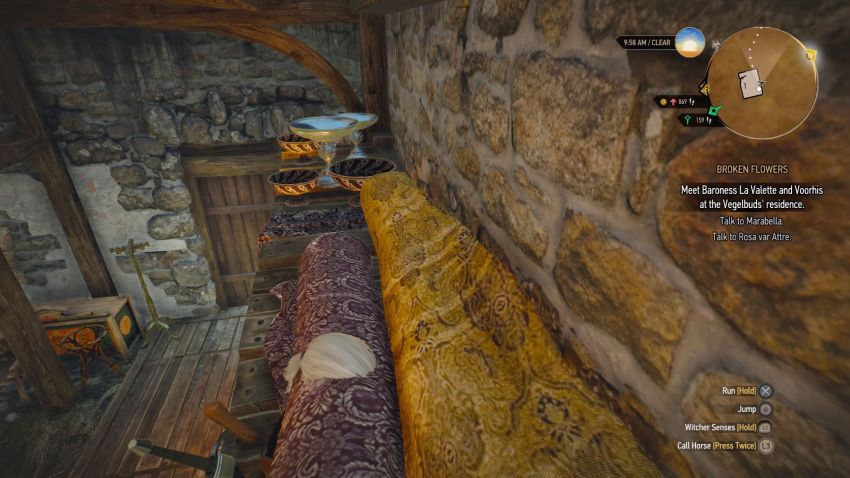 This one amuses me the most.

See that toupee on those rolled up rugs? That’s no toupee! That’s Geralt, clipping through the rugs in a way that renders 97% of him invisible, 3% hair. It was even funnier to watch him walk around, because it looked like some strange white creature sliding around on a rug. 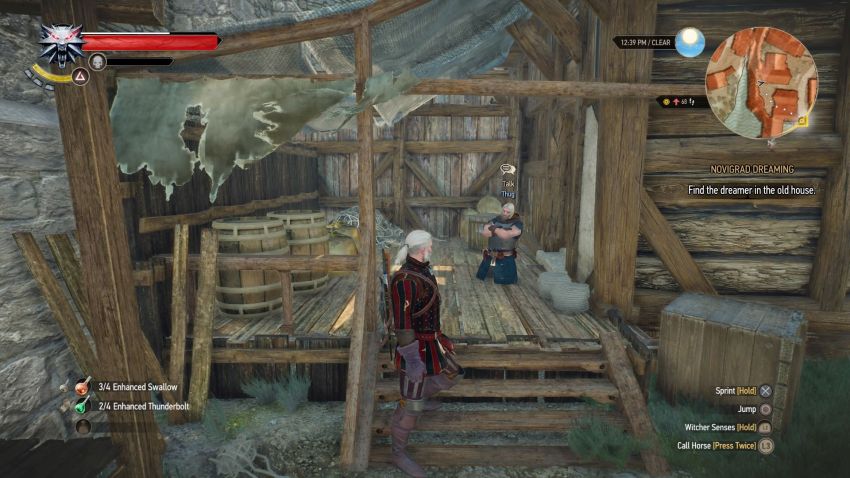 I thought at first he was legless (poor thug), but turns out, standard porches don’t apply to him. He just cruises right through.

This was one of the only times that a silly glitch backfired.

I was fighting harpies, and the game full on spazzed out and suddenly I was seeing everything in first person. Then I would move and see the edges of Geralt’s head just enough to make seeing anything else annoyingly difficult. I was trying to aim at the remaining harpies, but the weirdness was effecting my aim and shooting it all over the screen, so I thought, maybe if I jump in the water I will be able to snap him out of it, which resulted in the above situation: Geralt was in permasquat. He was walking around on the water all hunkered down like he was trying to drop a load, and when I got back on “solid” land, the game spazzed even further. I had to restart the game just to get it working again.

Still, watching him squat around on water was pretty amusing. 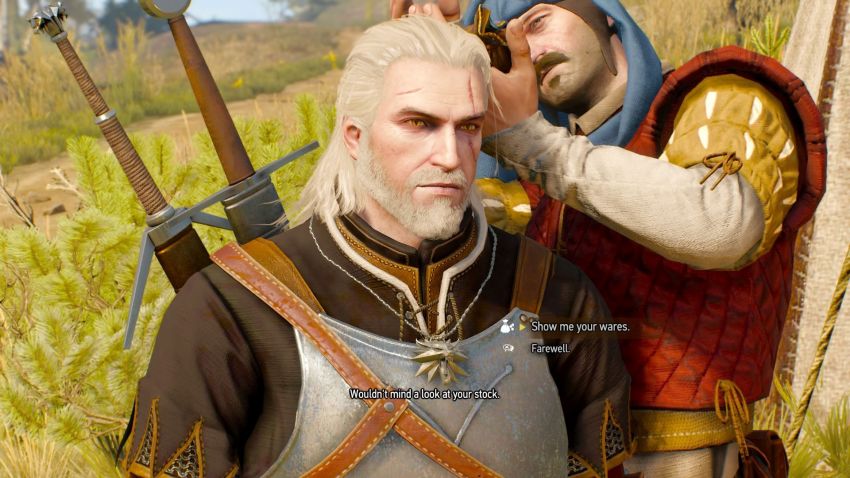 The infamous glitchy merchant, only this time with space bubble issues. 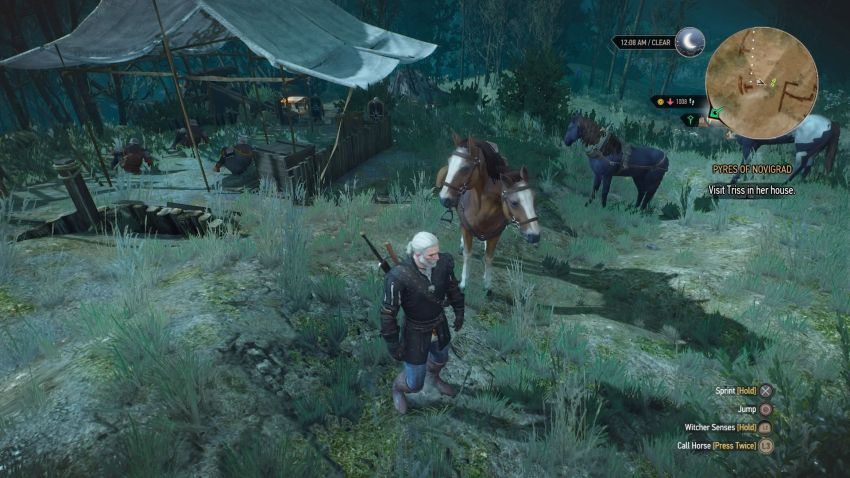 Oh two-headed horsie, do you eat twice as much?

What you can’t quite see in this image is that all three horses on the screen had two heads each. So, at the correct angle, you could have seen six horse heads and three horse bodies. I must have stood there for a couple of minutes just marveling at the situation. 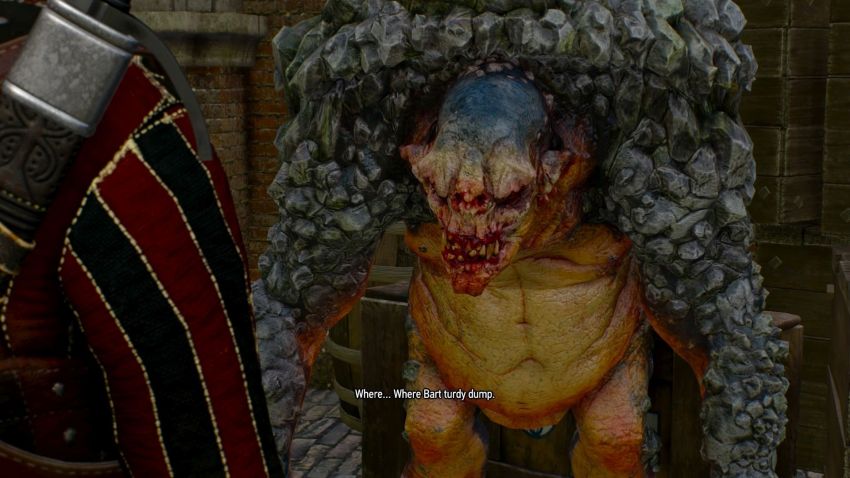 Okay, so this isn’t a glitch, but it made me laugh out loud.

Excuse me, a rock troll admitting where he “turdy dumps.”

And with that, my sophisticated sense of humor and I wish you a wonderful weekend. Cheers, friends.