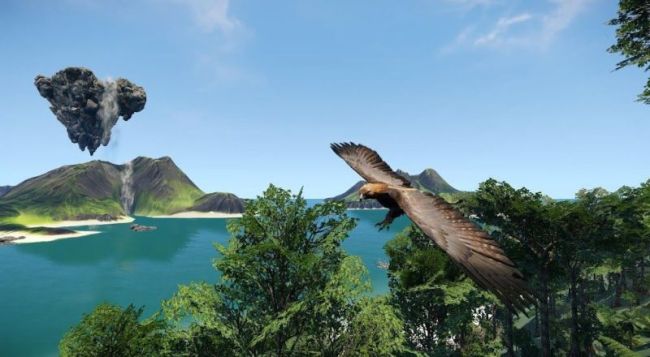 Wander is a non-combative MMO, which I’d written a piece about back in February. I was extremely pleased to hear a release date announcement last week, especially when I heard it was coming so soon: the game drops tomorrow, June 4th, for both PS4 and Steam.

Through the wonders of the internet, I was fortunate enough to cross paths with Wander MMO studio head, Loki Davison, and he was kind enough to answer a few questions. Please read on for an intriguing look behind this developer.

What was the inspiration for Wander? How long has it been in development?

My past as a nomad / wanderer in Central Asia, Siberia and the Himalayas  (sort of ironic that I’d be making a game about the tropics, I suppose) was a big influence. I was actually born in the tropics and some of the environment is based on the types of trees I played in as a kid, and the rainforest of northern Queensland, Australia. I wanted a game where you could collaboratively explore and share what you’ve found with other people. A lot of my interest in multiplayer games comes from growing up on a farm and not having other people around. MUDs were the first online multiplayer games I played and I loved playing with other people in them and being something totally different than the rural farm boy I was then.  The flight mechanics are inspired by my experiences as a paraglider pilot.

Work started on Wander in February 2012. The first few months were spent trying to collect the right people and getting the basic idea worked out. I’d say the project hasn’t grown in scope so much as it’s been continually focused and refined. We’ve tested a lot of features, cut those that didn’t fit, and polished the ones that did.

How did the Wander MMO team assemble?

I was very lucky to find the right people for Wander. I got some amazing artists involved early on and then went on a hunt to find a great writer which took a little longer but we were really happy to find Crystal. Our composer is actually a good friend of one of our opera singers who used to be in a band with me. So I guess, contacts and people I knew! Luckily our art director, Garth knows a lot of great artist and has a huge amount of experience from working on titles such as Far Cry and LA Noire.

What were the largest obstacles the team had to overcome in the development of Wander? How were they powered through?

Doubt from ourselves and from the local industry early on were the biggest obstacles I think. Pretty much no one was doing big, beautiful independent console and PC games in Australia when we started. MMOs by smaller teams are also a scary thing to tell people you are doing! Persistence and belief in the idea was how we powered through.

What aspect of Wander are you most proud of?

Mmm… I like it all! Sound design, music, the wind system and Rozhda. The Rozhda system needs a little more work but I like it a lot already.

What drew you to develop for the PS4?

A dedicated gaming machine with plenty of power is attractive for a game that wants to make a beautiful and dense rainforest. Console is really attractive for a developer because you can make sure that each player has the exact same experience, because they’re all playing the game on the  same hardware. We also liked the input options with the DualShock 4, for example force feedback (vibration), and gyroscope. It makes the flight much nicer! We also love the touch pad and have implemented it heavily in our gameplay.

How does the finished game differ from the game you set out to make?

It’s just what I wanted, except better because a bunch of great people added their ideas into it.

What are your top ten games of all time? How did they influence you?

And watching my brother play Dungeon Master on the Atari ST. :)

S.T.A.L.K.E.R. because of its amazing sense of atmosphere and great storytelling. Mornings in Stalker are beautiful. I wanted that atmosphere and a world you could explore, minus the radiation.

Is there a progression system to Wander? Are there set objectives? What pushes the player to keep playing, aside from the exploration?

There are lots of ways to play; either you can focus on the narrative and the quest is to understand what’s going on, or you can focus on getting the trophies and skydiving from the floating island onto a griffin. You might just want a good griffin flight sim.

What do you hope people take away from the experience of Wander?

I want them to be relaxed and soothed. I want it to feel the opposite of reading YouTube comments or an angry discussion thread online. The world is a beautiful place full of great people, and our video game experiences can sometimes reflect that.

A sincere thank you to Loki for taking the time to answer these questions.

For a closer look at Wander, please check out the launch trailer. Wander releases on PS4 and Steam tomorrow, June 4th, at a price of $25.