I know it’s a bit ridiculous to feel burned by a game, but after a couple of recent issues (the annihilation of my beautiful camp in Fallout 76, chiefly), I feel burned on gaming in general.

I actively feel dumb about that.

I had been really enjoying myself with the broken mess that is Fallout 76. I enjoyed it right up until the moment it took a colossal dump on my gaming time and wiped out progress. Despite that, I had still wanted to play it, but I forced myself not to out of principal. Who’s to say it wouldn’t happen again? And again?

I’m also getting burned out on Destiny 2.

Now, I love Destiny. I loved the first game far more than the sequel, but I still love the moment to moment gameplay in Destiny 2. I was looking forward to seeing what the annual pass for year two held…right up until I saw Bungie’s roadmap.

They are making it seem like it’s a better deal, all this new “content,” but none of it is what I had wanted and come to expect from any Destiny expansion: story DLC. 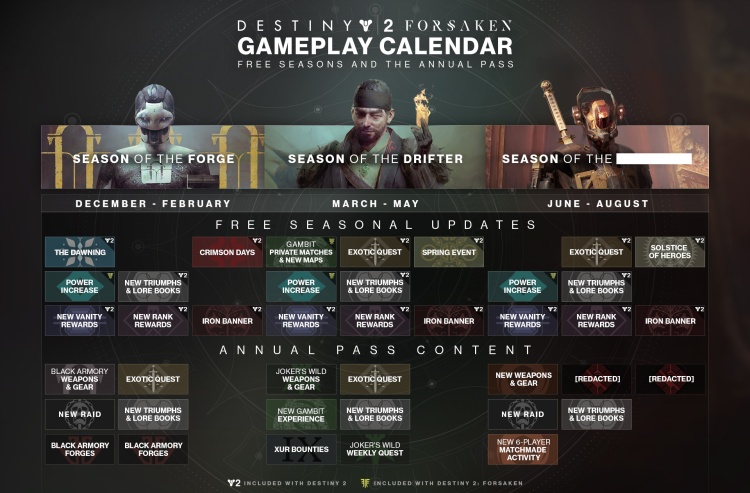 When Bungie highlights two exotic quests, new triumphs and lore books, some new gear, and a couple of new raids as the annual pass content, that does (and did) nothing for me. I am burned out on new multi-step bounties, especially when they are now replacing proper expansions (e.g.: The Dark Below).

They are busy work. And I don’t care for busy work.

Case in point: I’m doing a bounty right now where I have to do 40 Gambit matches. 40. The bounty is filled with other requirements (like 500 auto rifle kills), but as I played some Gambit today and had no fun at all, I was asking myself: what am I doing this for?

I don’t think anything in Destiny’s bizarre history has turned me off as much as this particular infographic.

The game, and the direction Bungie is taking, are turning me off in a fundamental way. None of that annual pass content interests me.

I’m genuinely glad for people who are excited about it, I’m just not one of them.

Between the Fallout 76 nonsense and the present/future of Destiny 2 nonsense, I’m very suddenly finding myself feeling burnt and burnt out.

It’s ridiculous, really; there are a grillion games I’d like to play, but I’m decidedly unmotivated to start any.

Perhaps the time of year isn’t helping, and I know my general mindset is fairly poor as of late (apparently by “as of late” I mean “the last couple of years”). I’ve found when I feel like this, I often dive in to a game I don’t care about (at least at the onset), because I don’t feel invested in the experience prior to beginning it. With lower expectations, I seem to be able to enjoy myself more which, I understand, sounds quite dumb. Games are meant to be experienced if not enjoyed. Why my preconceived anything should play into it is beyond me. I like to go into as much as I can with an open mind; right now I feel closed for business.

I know some people love this time of year, but it really just sucks so hard for some of us. I’m one of those us.

You know what? I think I’m going to force myself to play something new today. Even if it’s just five minutes, even if I’m not into it, even if any number of other excuses; I’m going to play something new today. Worse case scenario: I don’t break out of this funk and things remain situation: crap for motivation. Best case scenario: I start a game and enjoy it and POOF! On my way to enjoying gaming again.

If none of this made sense, you have my apologies. I was all prepared to write about something else today, but this is all I can think of, gaming-wise. I’ll save my “If Cloud Was An Animal Crossing Character” piece for Friday.

Have you ever felt burned by a game? If so, which game?