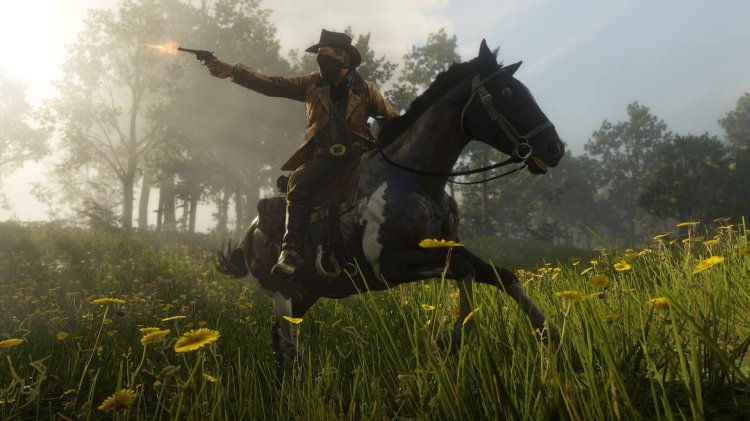 It was recently announced that Red Dead Redemption 2’s install size would be 105GB, making it the largest install from disc I’ve ever seen. I can only assume this means the campaign and the online mode are considered separate instances; if they aren’t, hoo boy, this game could be HUGE in every sense of the word.

(That file size is so massive, it has even scared the horsie in the image above.)

Prior to this, the largest install I’d seen was for Destiny 2 at 69GB (I know, nice); that’s still an enormous file size. I’d thought the largest was surely The Witcher 3: Wild Hunt, however that came in at 63GB.

With games getting more and more complex and requiring more space, this has me a bit concerned. The standard PS4 is 500GB, and only really 400 and change is available from the get go. You can get a Pro with 1TB, but 105GB is still a sizeable chunk on either setup. I now have a 4TB external drive, and I love it, so I’m not as worried about all that space being taken up with one game, but is this the direction we are headed in the near future? If so, systems are going to need to increase in data capacity far sooner than later. I like the ease of external drives, but I’d still prefer the drive be part of the system internally.

Even as I write this, I know games will generally have larger and larger install sizes. I know a lot of folks already do the old switcheroo when it comes to deleting older games to make room for new ones. I do wonder how long this is sustainable before consoles see a massive increase in capacity. I have to imagine next gen will have a standard 2TB hard drive at the least.

What do you think about these ever-increasing install sizes? Have you had to make adjustments to your consoles to accommodate the data requirements of modern games?

This weekend I’m going to challenge myself to play and complete two new to me games; I just want to break out of the current gaming rut I’m in. Honestly? I think I want to finally play Shape of the World, as well as Blackwood Crossing. I still want to try out Strange Brigade and, so help me god, if I don’t start Shadow of the Tomb Raider by the end of the day, I’m not going to let myself play any video games at all this weekend.

What will you be playing this weekend?

Please be safe out there friends, and please take care of yourselves. Cheers.