Once Upon A Time, I Worked At Disneyland 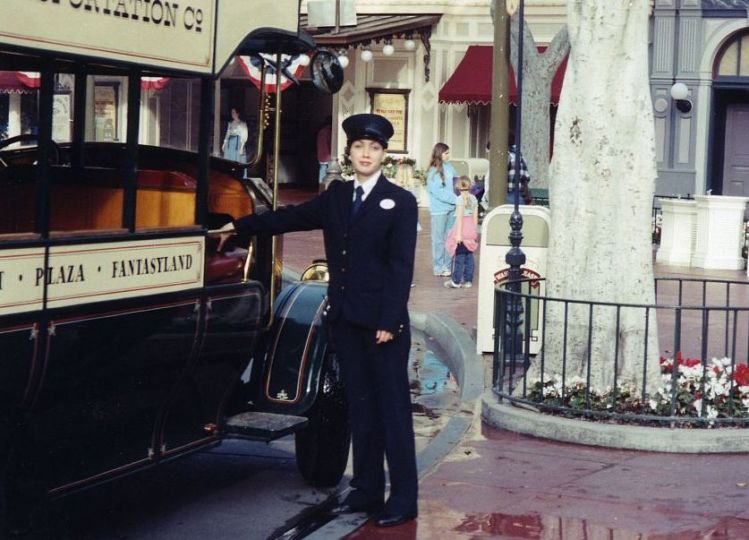 Growing up, I’d always loved Disney. The park, the movies, the man. After we got a VCR, I managed to tape Robin Hood off the TV, and I must have watched it dozens of times.

All that love reached fever pitch around 1996, the year I finished high school. I grew up in the Pacific Northwest, and I’d always dreamed of working at Disneyland. There was something specific I wanted to do there: work on the Storybook Land Canal Boats.

I was so determined to find a way to make it happen that, in 1997, I transferred within the hotel chain I worked at to an Anaheim property, found an apartment online (that was when the internet was just starting to become a thing), and packed up all my things and moved. My goal was to work at Disneyland within a month.

I moved there in September.

I got hired at Disneyland in October.

The first thing I did after I was settled in Anaheim was apply at Disneyland. I almost immediately had an interview. I passed that interview and was granted a second interview. It was at that second interview I told them I’d moved just to work there. I told them what I wanted to do. After that interview, I was asked to wait in the lobby area. I sat down next to someone and we started talking. He mentioned that two of his friends also applied and one of them was in another interview.

Hilariously enough, all four of us were hired. And we all became friends. To this day, we are still in contact.

My personal life at the time was a mess. The person I was with…let’s just say we were not a good match. I say that for frame of reference.

My orientation and training were in short order. One of the girls I trained with was named Amanda and I liked her so much right away. Another amazing friend made.

Side note: She and I lost track of each other for over 15 years and, after searching years for her online, I finally found her on Facebook last year. I was so glad to connect again.

The training for Storybook Land itself took two days: one opening shift, and one closing shift. My trainer also happened to be a trainer for Space Mountain and I told her how I’d always wanted to see it with the lights on. Later that night, she told me she could do one better: she arranged for all of us trainees to ride it with the lights on!

I was beside myself.

We not only rode it with the lights on, but the music was off. It was an eerie experience. You could hear every mechanism of the coaster, and we could see just how small the space really was. It was amazing and I was so grateful.

At that time, when you worked in attractions (as I did), you were typically only allowed to learn one new attraction per year. You could, however, pick up shifts doing crowd control for parades and Fantasmic. I wanted to work as often as I could, so people knew they could offer their shifts to me and I’d gladly accept them. Storybook Land in particular was an attraction where people wanted to offer up their shifts, so even though I was what was called a CR (casual regular) and only guaranteed so many hours per week, I was often working 40 hours a week.

Since you could also enter the park for free as a cast member, I spent nearly all my free time there as well. My home life was consistently difficult, so the more time I could spend in the park with friends, the better. My friends were wonderful; they were my lifeline.

I was offered a Fantasmic crowd control shift on my birthday. I accepted it happily. I was afraid the person I was with would forget or, worse, wouldn’t care.

That night, as we took the raft to Tom Sawyer’s Island to tear things down, I was feeling particularly low. One of those four friends was with me on the raft, told everyone it was my 20th birthday, and they all sang happy birthday to me as we crossed the Rivers of America.

It was such a beautiful moment. I can still remember it like it was yesterday. It was a chilly night. I had felt so sad and lonely and, in short order, my friend Ryan turned it around.

All these years later, and I will never forget his kindness.

One of the big deals working at the park is the annual cast member Christmas party. It spans two nights so you can work one night, and have the other off; everyone gets to go. I went with my friends and I remember feeling the magic in the air. The next night of the party, while I was working, Amanda and I were able to ride various attractions while on our breaks. I can still remember running back from Indy in our Storybook Land costumes.

My friends and I would often go to a certain Denny’s after our shifts. Those nights were so special to me. I was so grateful to have made such amazing friends. We all loved Disney. We all loved being part of the magic.

I had a manager named Susie (we are also still friends!), and she and I hit it off. I called her my “Disney mom,” and she really was. I pestered her to allow me to train on another attraction and, a few months after I was hired, I was offered to train on Main Street Vehicles. I couldn’t accept fast enough.

I trained for two days and, after that, I was able to drive the Omnibus, the fire truck, and the 1903 cars.

I loved driving those vehicles.

After less than six months, things were going increasingly badly with the person I was with. To make a long and unfortunate story short, he made it so we had to move back to the Pacific Northwest.

My Disney mom sincerely offered to let me move in with her so I could stay.

You have no idea how hard I considered that offer. I still treasure her kindness.

I wound up moving back to the Pacific Northwest.

I didn’t even get to reach a year at Disneyland. I had wanted my year pin so badly.

When I moved back to Washington state, I decided to apply at the Disney Store since I still wanted to work for Disney however I could. I wound up getting hired and worked there for just over a year. My store manager knew I wanted my year pin, that it meant something to me. When the time came, I can remember she held off giving it to me because she knew what was coming. I didn’t get enough hours at the store (she knew that), so I’d had another job in the mall. Between the two I worked over full time. Over the course of that year, I’d become a photographer, and that was taking most of my time. I’d had to leave the other mall job, and she knew I would leave the Disney Store, too.

She was right. But I was so happy to have that pin. I still have it.

Years later, after I moved to Germany, I found a website for former cast members called Hasbeens. I randomly connected with someone who also used to work in Fantasyland. His name was Brian and, weirdly enough, also lived in Germany, only a couple of hours from me! He was a professional opera singer (still is) and, after much written communication, we decided to meet in person at his opera house! This was all very interesting because my training is in musical theatre which, at that point, he knew.

He wound up introducing me to a soloist at his opera company named Brent. Brent, like Brian, had also grown up in Southern California.

What a small world.

Brent wound up becoming my voice teacher and taught me to sing in German (I can still remember him rapping on my knuckles with a pencil as he was teaching me German phonetically before I knew what I was saying), and when he went to another opera company years later, I followed him there to continue our lessons.

I think about those times, the friends I made, the glorious memories I have, and I am so grateful. It was literally a dream come true.

I’m so fortunate to still know some of those magical people. Working at Disneyland gave me more than I could have dreamed of.

For fun, here are some photos of when I worked there that I was able to dig up. I was all of 20 years old. I hope you enjoy. :)

Here I am driving the Omnibus. 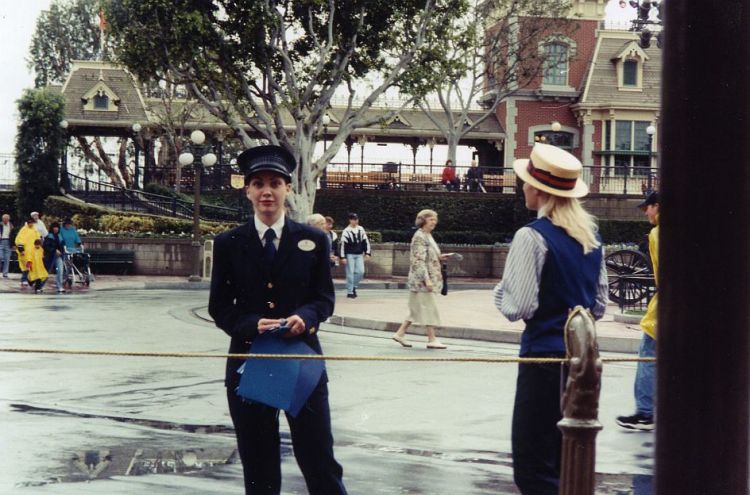 Here I am working crowd control on Main Street. We were setting up ropes and stanchions prior to the parade. I loved that outfit. 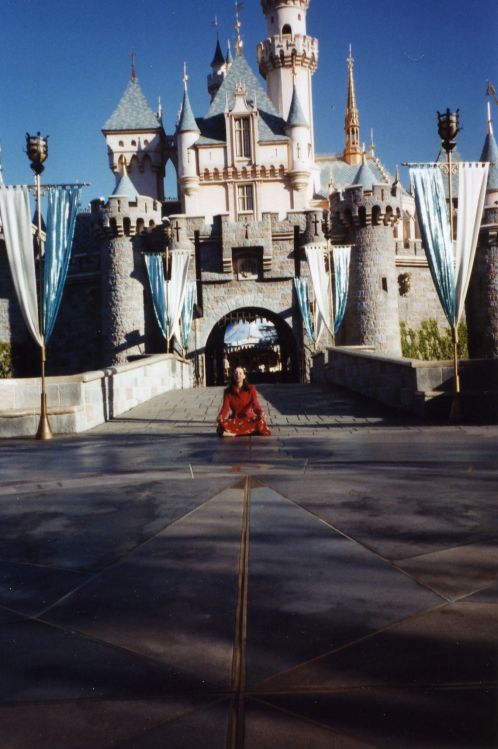 When my friends found out I had to move away, they helped arrange a very special morning. Three of us came into the park well before opening, and we took a bunch of photos with no one else in the park. I mean, there were very few employees in the park. We got dressed up for the occasion. Here I am, meditating in front of the castle.

At that same morning excursion. This photo is on the cringy side, but oh well. P.S. That was the nicest outfit I owned at the time. 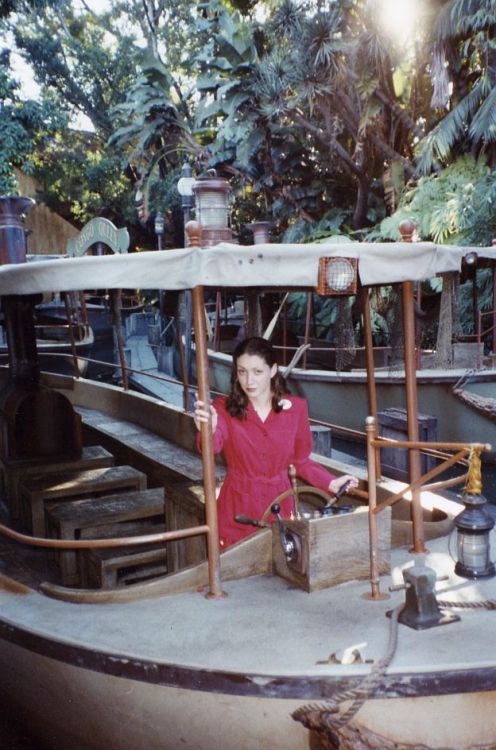 At the time I was leaving, I had my sights set on training on Jungle Cruise. It had already been discussed, but I didn’t get to stay long enough for it to happen. So my friends made sure I got a picture of me pretending. I look so silly here, but I’m still grateful for this photo.

I know you can’t see my face, but I love this picture.