The New Animal Crossing: Pocket Camp Event Is Filling Your Garden With Bats 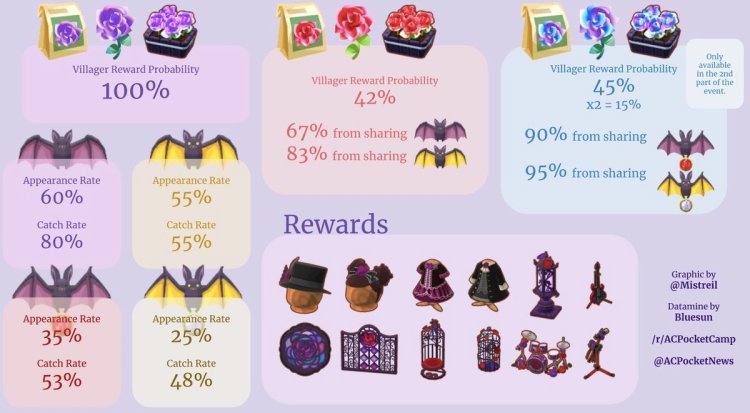 A short time ago, Animal Crossing: Pocket Camp had an event called Rover’s Garden Safari where you had to plant special flowers in your garden. Butterflies would visit those special flowers, and it was your job to catch as many as possible. Unfortunately the catch rate was abysmal, and it seemed clear to the Pocket Camp players out there that it was an effort to get players to spend real world cash to guarantee a better catch rate.

It would appear Pocket Camp has learned their lesson and is moving forward in good stead.

As described within the game:

Inspired by her favorite band, Lottie is trying to collect as many rare gothic bats as possible. You can help her out by planting gothic roses in your garden and then catching the bats as they appear. Do your best – Lottie has some rockin’ rewards for you!

It’s the same idea as the butterfly event, however, after several hours with it, I can attest that the catch rate is far more successful.

Also, as per the Notices section of the game:

We have made some adjustments based on the feedback received during the Rover’s Garden Safari event.

It’s positive to see the developers have taken the widespread issues players had with that event to heart.

I’ve already been enjoying collecting bats and sharing them with friends (that’s Lottie and I above), but all this got me thinking about the inevitable Animal Crossing for Switch.

I’m wondering if Nintendo will try to incorporate online connectivity with a new Animal Crossing entry for events such as this. Of course, a mainline entry in the series would, no doubt, be a richer and fuller title, but special events that are more fleshed out than say, the Halloween events and the Thanksgiving events in New Leaf would be a fun addition. I recall checking in at the post office in Xanadu (my town in Animal Crossing: New Leaf on 3DS) each month for the special limited-time items. I would love more events in line with what Pocket Camp is doing.

Also, if we’re talking about a wishlist, I’d love to be able to have townsanimals that just stay as opposed to the ever-looming threat of them moving away. I can’t tell you how that whole system plays with my video game emotions.

Back in the day, well, the first full year I had with New Leaf, I played every single day except one. 364 days out of 365 is pretty dedicated. I wanted to make Xanadu as wonderful as it could be.

After that first year, I played slightly less, perhaps five out of seven days a week. At some point, one of my favorite townsanimals (Rod) had decided to move and when I logged in again, he told me he would miss me and was moving that day.

I was so video game upset I stopped playing for a good long while. I knew if the Animal Crossing gods took Rod from me, they might also take Maple, and if that happened, I might never log in again.

(Side note: I adore Maple. She was my best townsanimal friend.)

I really like that the animals you invite to your camp in Pocket Camp stay unless you explicitly send them away. Actually, as I type that, I suddenly feel like a whimsical warden, imprisoning them against their will or something.

OH GOD WHAT HAVE I DONE

Here’s hoping all those creatures are enjoying their time at my campsite and aren’t secretly wishing I’d turn them loose to have other adventures.

While I ponder those disquieting thoughts, I will head back to my campsite’s garden and catch more beautiful bats from my gothic roses.

With that I ask: what will you be playing this weekend?

I think it’s time for me to start directing my attention back to single player experiences. I will still continue my Borderlands 2 run with a friend, but several single player games are calling my name and I’d like to heed that call.

Please be safe out there friends. Cheers.