If A Game Lets Me Dress As A Shark, I’m Going To Play That Game 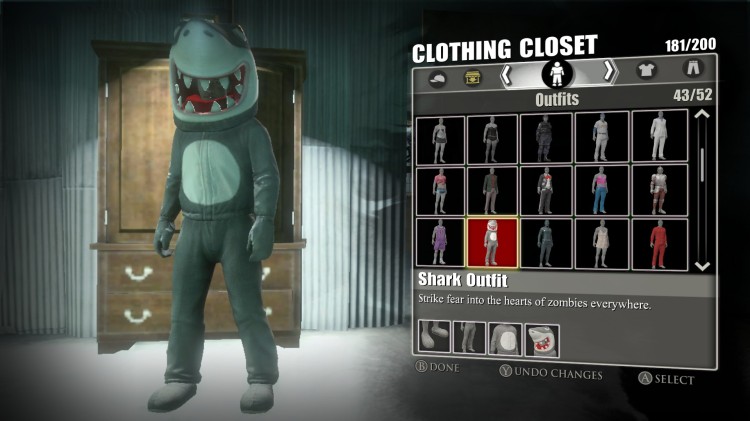 I’ve been wanting to start Dead Rising 4 for a while now, and not just for topical holiday reasons. Yes, I know the holidays are officially over, but I find myself in the mood to play something snowy and irreverent.

On top of that, I decided to revisit an old episode of Game Informer’s Test Chamber for Dead Rising 4. I was reminded there is a shark outfit in the game, and something about that lit a fire beneath me.

Some of you know I’m terribly amused by land sharks (so much so that the Destiny clan I created years ago is centered around Land Sharks), and I realized that if a game allows me to dress as a shark, I am pretty much going to play that game at my earliest convenience.

In South Park: The Fractured But Whole, I found a shark outfit early on and I wore it almost the entire game: 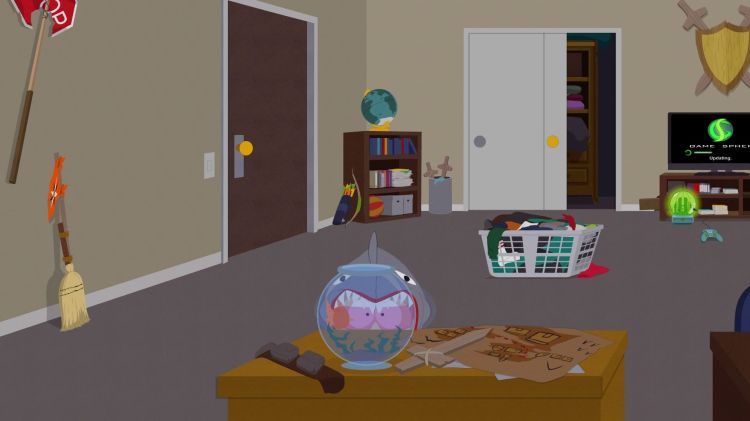 Every time I saw myself bop around South Park, I was terribly tickled.

I already wanted to play Dead Rising 4, and when I was talking to a friend about it the other day, I brought up that you can find and wear a shark outfit and he agreed it was right up my alley.

I have no idea why I have a fondness for shark silliness or land sharks or shark costumes. I don’t inherently love real life sharks more than any other creature. Sure, I think Jaws is one of the greatest films of our time, but that’s not why either. I have zero idea why I love shark costumes.

I do know if I randomly shout “LAND SHARK” in reality, I will crack my own self up and, really, what’s better than that?

(I know, a lot of things are better than that, but cracking yourself up is also fairly desirable.)

I have also come across non-silly sharks in games, namely Abzu, and was moved by our soggy connection. 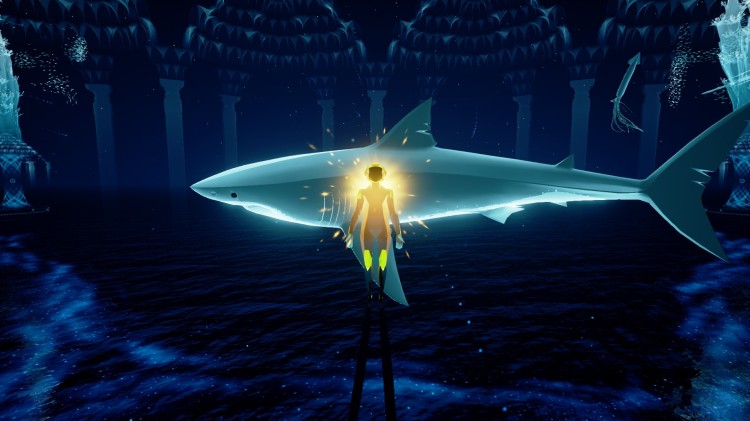 I wasn’t prepared for the emotional impact of my character’s relationship with this shark. It took me by surprise and broke my heart a little, as well as brought me an exhilarated feeling by the end of the game.

Sharks are people, too.

Except that they are sharks and can eat you, but really, sharks are people, too.

As I looked back for that image, I came across some hilarious images I’ve used before of different sharks in games so, why not, let’s revisit them here! I mean, it’s Friday after all. Who says I have to live by any rules?

RULES ARE FOR SQUARES

(Just kidding; I think rules, and abiding by them, are important.) 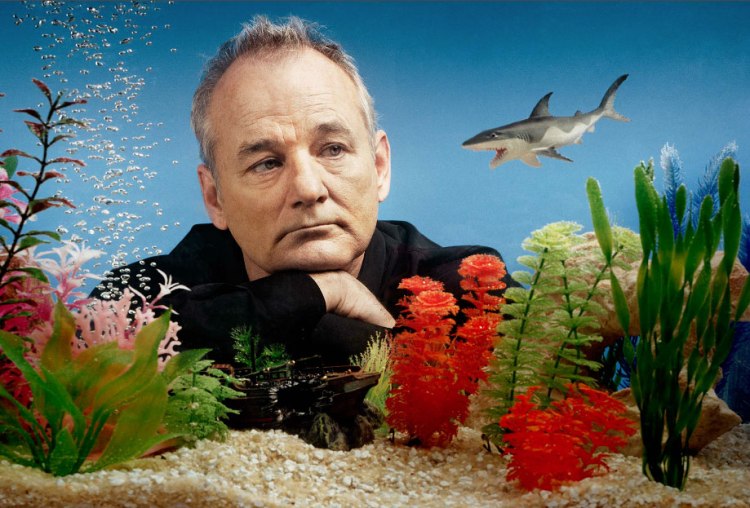 I feel like I relate to this image of Bill Murray with a shark. I feel that expression often. Wistful sadness. 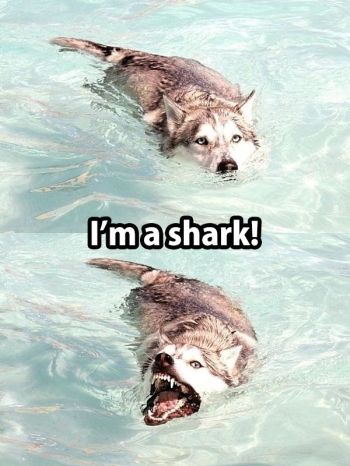 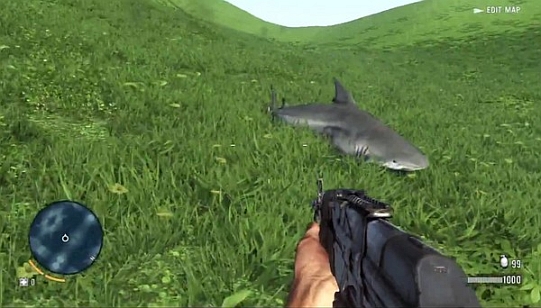 The infamous (and unintentional) land shark in Far Cry. 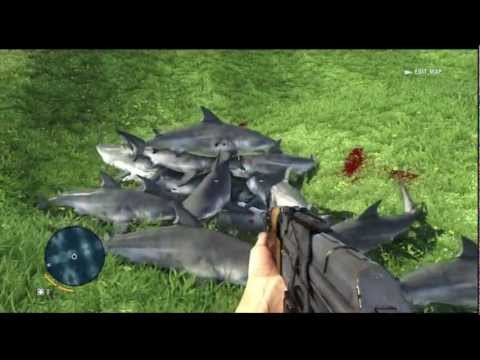 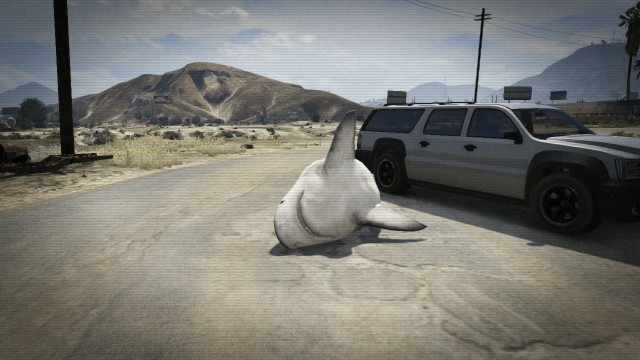 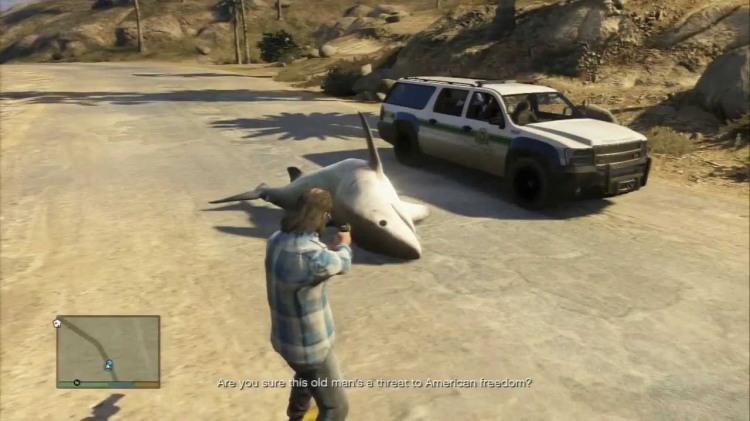 I’m pretty sure that gun’s unnecessary.

And, to round out this trip down memory lane, one of my favorite GIFs:

I hope to revisit these delightful land sharks again in the future. Sometimes you just accidentally wander down memory lane, and sometimes it will be with land sharks.

With that I ask: what will you be playing this weekend? Also, what costumes do you enjoy wearing in games? Do you also enjoy wearing shark costumes?

Fun fact: a friend of mine (who also loves land sharks) once sent me a video to cheer me up while sick of himself in a shark onesie while dabbing. Amazing.

Please be safe out there friends. Cheers!