The Most Powerful I’ve Felt In A Game

I am not into the super hero hype. I have never been into, nor understand the current obsession with, the plethora of super heroes in pop culture. I appreciate what they represent for people, but I’m not stricken with the same fever.

I could barely sit through the Avengers, despite my great affection for Joss Whedon. There were just too many special effects for my liking, and I found myself tuning out towards the latter third of the film. Was it entertaining in part? Of course. It just wasn’t my cup of tea.

I quite enjoyed both the first Iron Man as well as the first Captain America, however those boiled down to my appreciation of the lead performances in each (respectively, Robert Downey Jr. and Chris Evans).

So it is with this background that I say Cole MacGrath from Infamous and Infamous 2 was the video game character that has made me feel the most powerful. I can’t say any one specific thing about why this is so. Instead, it’s an amalgam of so many factors that created this exceptional feeling.

Right off the bat, the visual style grabbed me. The graphic novel aesthetic was striking and beautifully done. I felt invested in the story before I’d done a thing. And that says something to me about a game.

I was intrigued by the morality system. When presented with such in a game, I default to the “good” side of things (though I did play a run through of “evil” in the first Infamous for the trophies), so it’s as though I’m on auto pilot.

From the moment you take control of Cole, there is a definite sense of power. Sure, you haven’t unlocked many of your base skills yet, but Sucker Punch did a remarkable job of conveying that sense of an almost dangerous power within you. Half the time, it seems as though you can’t even trust it, and it’s up to you how you use it. Certain powers can only be unlocked if you err on one side of the good/evil spectrum. I like that you might not see this massive destruction you are capable of if you choose to walk the straight path.

But just knowing it is there…dormant and waiting for you to harness it, well, that’s a powerful feeling in and of itself.

And if you were to choose the “evil” side of things, you’d always know you were capable of being “good.” 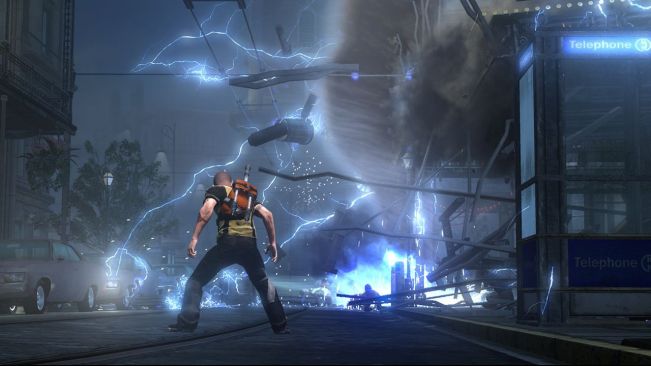 In both games, based on your actions, you see how you are effecting the world around you. I found this especially interesting in Infamous 2, as your actions are more influential than ever. The destruction you cause, whether intentional or accidental, is dynamic. You can see things crumble off building from your attacks. You can fling cars at baddies.

Oddly, what made me feel the most amazing was when Cole really got the Static Thrusters going in the second game and could fly with greater length and precision. Going from building to building with this gorgeous glide was enthralling. I couldn’t get enough of it. With the Static Thrusters, the traversal was seamless. You could glide from one building to the next, land on a power line and slide across it, then attack your foes with style once you arrived.

And even as I’m typing this, I am in no way appropriately conveying how amazing it felt to play this game. To be immersed in that world.

Which takes me to…

…the gorgeous locations in the games. Whether you are in Empire City or New Marais, the locations are evocative and feel alive. I am a sucker for atmosphere, and these games have it in spades. Putting Cole in these settings further builds the picture of how your power (and how you use it) effects the world around you.

And the score! I am a great lover of video game scores, and the music for both the first and the second games was perfectly suited to the story, location, and characters. I often listen to the Infamous 2 soundtrack when I want to hear something that inspires me to get up and be active. There is something about the look and feel of the Infamous games already, but when you add that powerful score to things, it becomes an experience of power.

Infamous and Infamous 2 are among the most gratifying games I’ve experienced. Though I may not be into super heroes, I’m definitely into the larger-than-life aspects of these games. And no game has ever come close to making me feel as though I was as powerful as when I was playing as Cole MacGrath.

P.S. For funsies, I thought I’d include this adorable chibi-ish fan art of both “good” and “evil” Cole that I found online. I thought it was wonderful!