I am no stranger to bizarre dreams, and I mean really bizarre dreams. The kinds of dreams where I wake up thinking, “Well what the hell was that about?”

So it’s no surprise to me that I often have dreams about games I’ve played. Sometimes it’s the same view I have while playing the game. Sometimes I’m physically in the game. But rarely is it as cut and dried as the game is presented in reality. There is often something just slightly off. Or, as in a dream I had this past week, very off.

The first video game I remember dreaming about was Super Mario Bros. 2 for the NES. I dreamed about it before I had ever physically played it, and many times after I’d finally gotten my hands on it. I would hear the BOING! of my jumps, the THWOMP of pulling up turnips and the WHONK of hitting bosses with various items.

The second game I dreamed intensely about was Tetris. I daresay these would start as thoughts of the Tetronimos gracefully falling down the screen of my mind before I drifted off to sleep, and then, once asleep, I would continue to “play.” This happened over an extended period of time, and sometimes for many nights consecutively. It got to a point where I wondered if it was abnormal to have such dreams so often, so I (at the time) took a self-imposed Tetris break (back then I played it a lot). Eventually it tapered off, but if I ever play it for more than a few hours, it starts back up again.

Oh man. When I started playing Borderlands, almost from the get go, I was dreaming about it. I would dream about the battlefields littered with loot (which would look a lot like the above image). I would see dozens and dozens of orange weapons, as the loot drop rate in my head was far better than anything I’d see in reality. Enemies would ralph up piles of orange loot and I would wander around analyzing it and picking up only the best items.

I would see Bloodwing fly to each enemy, watch even more loot spring forth from fallen enemies, and then go pick that up. Seldom would the dreams be more involved than that, but they were always weirdly soothing.

BioShock was another instance of a game working its way into my subconscious. For some reason, it was the neon that would stand out most. I would wander through Rapture just staring at all the beautiful colors and listening to the mysterious sounds.

Diablo 3 was another game where the loot found its way into my dreams. I would see all those orange weapons (perhaps this happens because I love the color orange so much?) and items scattered across the environment and would methodically go around and examine them.

This never gets old.

Or at least it hasn’t so far.

From the moment I started playing The Witcher 3: Wild Hunt, I was hooked. I hadn’t expected that I would dream about it, but dream about it I did. The environments are so incredible, it’s no wonder they made it into my subconscious. 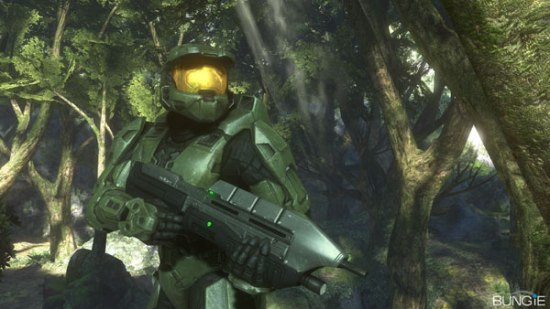 But the dream that prompted this piece was one of the oddest I’ve had yet. It was rooted in the original Halo: Combat Evolved.

Prior to falling asleep that night, I had been watching older episodes of Replay, and the one I was on when I fell asleep was for the original Halo.

Okay. So far I understand.

In my dream, I somehow had transported into the universe of Halo. I was inside the game. I was playing co-op with someone, but I couldn’t tell who.

Somehow we got separated, but we were both outside. I came across a cafe. Maybe it was a diner. Either way, Formica was involved.

Yup. Stick with me, my story gets better.

I wandered into this cafe and there were about a dozen tables. It was only after I was in the middle of the place that I noticed something odd.

There was a pair of people at each table, identical to every other pair. But who they were was weirder still.

At each table, there was a Simon Pegg and Nick Frost. There were 12 pairs of them total.

Now how freaking weird is that? I hadn’t watched any Simon Pegg/Nick Frost films recently, nor read anything about them. But there they all were. So I was about to excuse myself from the diner when all of a sudden they started attacking me. I had no choice but to eliminate the hostile threats.

I finally retreated outside when I remembered I accidentally dropped something inside. So I went back in. And that’s where it got really weird.

Yup. From Back to the Future.

And the same thing happened all over again. And I had to eliminate all of them as they were desperately trying to kill me (and where was my co-op partner?!). After each pair was taken out, I saw a gleaming mission item on a table and went to retrieve it: A flux capacitor. I needed it to repair my ship so I could get out of there.

So I took it, repaired my ship, and that was the end of my dream.

I woke up and was dumbfounded. My mind is weird.

And on that note, I wish each of you a peaceful and silly weekend. But I have to ask: has anyone out there had video game dreams? If so, what were they about? I’d love to know. Let’s all be weird together.