First: I never thought I’d be writing about a soda.

Second: OMG Surge is back!!!

Third: I am okay now. 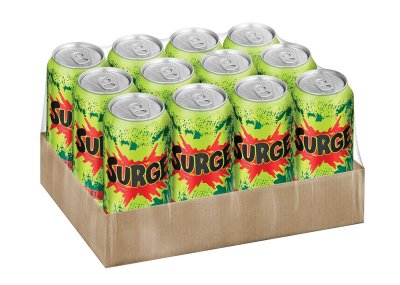 Today started as many Mondays do, but when I sat down to write, I found out by accident that something I loved from the ’90s and ’00s had finally made a comeback: Surge. And I promptly went over to Amazon and bought a 12 pack that will be in my fridge by Wednesday.

I am not a soda drinker. I drink nearly a pitcher of iced tea each day. I don’t like overly sweet sodas, and on the rareish occasions I do drink soda, it is on my “free day” once each week. On free day, anything goes, including soda.

I loved Surge. I used to drink it all the time. It was full of delicious caffeine! It tasted citrusy! It was sweet without being too sweet! It was soda perfection. And after 13 years of a Surge-free diet, I can once again indulge responsibly.

It was only today I learned the impetus for its return: The Surge Movement. I had no idea some very determined folks were even trying to make this a reality. But I have to say: THANK YOU SURGE FRIENDS!

I actually learned many things today:

Surge is a variation on a Norwegian soda called Urge.

Before the Surge Movement Facebook group, there was the Save Surge community (created by web designer Eric Karkovach).

And come free day, I will be drinking the crap out of it.