This Weekend Warrior Is Outside Her Zone 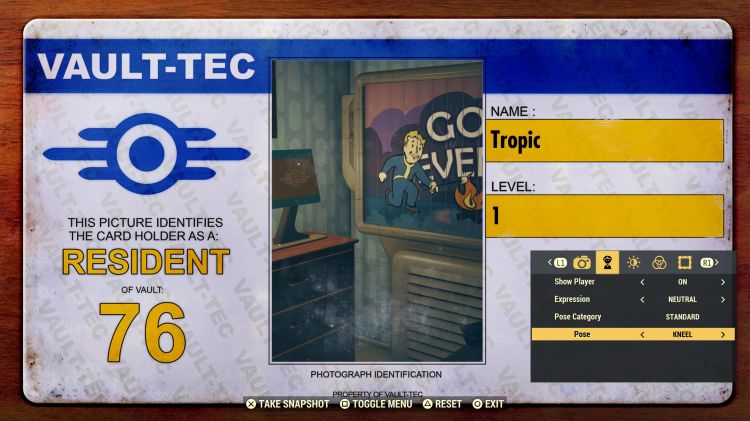 I feel the need to explain why I find that screenshot so funny. When I was first experimenting with the photo mode in the Fallout 76 beta, I was also trying to take my Vault-Tec ID card photo. I was messing with the settings and was cycling through the poses when I came to “kneel” which took me completely out of the frame.

I found that very funny.

This week I’ve been a mid-week warrior; I’ve been staying up too late, playing more than usual, and my system has been letting me know what it thinks of those choices (spoiler: my body is angry at me). I haven’t been this engaged with a game in a while (even though it is janky as heck), so I’ve been indulging in longer play sessions than I normally do (and at odd hours), and now I’m paying for it.

To be fair, it’s been awfully dusty here from all the Santa Ana winds, and I think I’ve been dealing with a cold on top of it. My system is mediocre at best, so I should have known better. I think I just got so excited about playing something new that I threw caution to those dusty winds, and now I’m a zombie.

Case in point: last night I was playing with a friend and even though I was super enjoying myself, I started to fall asleep while playing.

I normally write the night before I post, but I told my friend I needed to go to bed and that’s exactly what I did all of five minutes later. I climbed into bed and fell asleep HARD. Even though I slept eight hours, I still feel like I’ve barely slept. My system is telling me I need to try harder.

So, today, I’m going to try to get my errands out of the way early, then plop down on the couch with a warm beverage to relax and collect more plungers from the wastelands of Fallout 76. I may even build a more fully realized camp, complete with lawn flamingos as I love actual lawn flamingos (and flamingos in general) and I was lucky enough to find someone selling the plans for them last night. I can now build all the lawn flamingos I want.

I’m so happy about that.

Those are my gaming plans for the weekend: wander the wastelands, finally find my spacesuit (I have a great fondness for space suits), take as many rad screenshots as possible (pun intended), and sleep a little more than I think I need to. I’m sure I will also play some Destiny 2 (a friend is trying to get a special drop from the nightfall so I’d like to try to help with that), and I’d also like to start another game if possible. But really, I have a large organizing project going on and I’d love to see that through even if it means not starting another new game.

With that I ask: what will you be playing this weekend? Whatever you do, and however long you play, please remember to hydrate! It’s no joke.