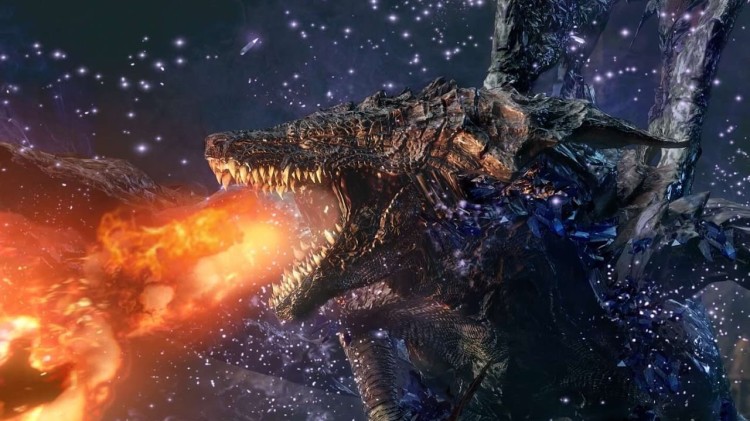 When I found that I loved Dark Souls 3, I surprised myself.

This past weekend, I discovered the incredible frustration certain bosses can cause. Namely, the supreme jerk, Darkeater Midir.

For those who aren’t familiar, Darkeater Midir is a great big a**hole dragon. He’s an optional boss, but I won’t be satisfied until he is dead dead dead.

My co-op partner and I went in to battle and Midir roasted us…literally. And repeatedly.

We tried going in with the summoned phantom for help.

The phantom was little help.

We tried going in without the phantom.

I’m not going to lie: I got a little cranky. I was trying to do anything and everything to see if it worked and it didn’t. Midir can cross the arena in a flash, blanket the ground below him with fire, nail you from range with a laser that would make a Blood Dragon proud, and tail swipe you with incredible accuracy that seemingly can’t be blocked with a shield.

If I sound frustrated, it’s because I was.

Not to mention the camera was the most frustrating it had been in the entire game. Locked on to Midir or not, it was a constant battle. I wouldn’t be able to see him, then I’d be stunned from an attack I didn’t see coming, finally get up and try to either dodge or estus, and get immediately killed.

The whole experience did make me think about what I’d do if I could mod games. I’d implement all kinds of changes that made the game more peaceful. I’d give my character the ability to Care Bear Stare any enemy with FRIENDSHIP and we could sit down and talk. I’d send in peaceful armies of puppies (DOG SOULS) to cheer all the baddies up. Maybe they are just upset there are no puppies in the world? I’d love to see some big scary enemy sit down and cry tears of happiness when they were able to hold a puppy and kiss and pet them. I’d make a rainbow “attack” that would cause enemies to think about why they were upset and murderous in the first place, and everyone could have a peaceful sit down over sandwiches and tea. Maybe they just need a hug? Who knows.

My version of Dark Souls would have a lot more giggles and a lot less death.

I played some Ghost Recon: Wildlands and I’m feeling the urge to wrap it up. As much as I love playing with my co-op partner, the game is starting to get a bit repetitive and I’m tired of being spotted and killed in the time it takes me to say “Unidad.” I think the game has a lot of things going for it, but it also has a lot of flaws. I’m a bit surprised that Ubisoft hasn’t patched out some of the issues, but I’m sure I will be glad I played it overall.

I didn’t get to Wolfenstein at all. I didn’t play much over the week, honestly. I don’t have a good excuse.

As a quick side note for anyone who knew I had been sick since the beginning of this year, yesterday I went out for the first time recreationally since January! It was just a trip to the dog park, but I actually drove there (first time I’ve driven in about six months)! It was glorious to be outside. I am finally starting to see the light at the end of the tunnel, and I can’t say how much of a relief it is. I may not be 100%, but I’m definitely considerably better than I was.

I’m hoping to get to Wolfenstein (big shock) and to really make strides on some 2017 releases this week. I want to level up my efficiency!

With that I ask: what will you be playing this week? Have you completed many 2017 releases? What is your game of the year so far?