I am a huge admirer of art, and I tend to see it in many forms. I adore the collection of video game art books I have, and one of my favorite aspects of any game is the art style involved. When the atmosphere is rich, visual glory isn’t far behind.

I came upon this topic when thinking about rounding out my week of BioShock related posts.

I had been so taken upon playing BioShock, that I sought out a couple of in-game items that had been created in reality: a wearable Splicer mask (seen above), and a Rapture Masquerade Ball 1959 poster (below). Both are hanging in my flat and give me endless pleasure to see them each day. The mask is well-crafted and looks appropriate hung off of bare nails, something I enjoy as I appreciate an industrial aesthetic. 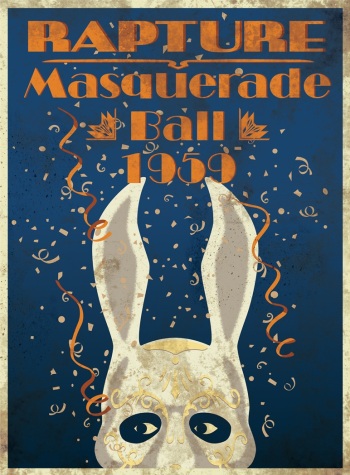 I had the poster matted and framed in a bit of an Art Deco fashion (a dull golden mat inside a silver frame), and it looks equally appropriate for the art style. It’s right next to the front door, so I see it each time I come and go.

I may not play the game each day, but I can see these beautiful reminders of the experience.

When Borderlands 2 was up for pre-order, I found out about the Ultimate Loot Chest Edition in time to snag one via Amazon. I was so excited I thought I would burst. I had played hundreds of hours of the first Borderlands, and the thought of having one of those lovely loot chests in my living space appealed to me. When it finally arrived, I was a bit disappointed as it looked a little cheap (in all honesty, it felt a bit cheap, too), and was difficult to open and close smoothly.

A small disappointment? Sure. Am I still glad I have it? Yup.

In the Loot Chest edition, I ended up with the Marcus bobble, and, like most everything else in the collection, I gave it away because I didn’t have use for it. I try to streamline as much as possible, and since I already had a new and sizable faux loot chest to make room for, there was no reason to keep the other items.

I will say, when, after the extreme popularity of this collector’s edition, Gearbox released a Diamond Loot Chest Edition (thankfully, not actually made of diamonds…Butt Stallion needed those, right?), I was jealous of the in-game codes included for some of the best weapons in the game.

That’s my kind of collector’s edition.

As much as I love certain physical items from games (and game worlds), I am always more about in-game items then I am about physical ones.

The only other items I own are two small Claptrap figures, one Jakobs (above), and one in blue. I admit, I prefer the Jakobs Clappy (it is a great reminder of the Zombie Island of Dr. Ned), and he lives happily in my piano room.

I hope he likes show tunes.

It’s funny, before I sat down to write this, I assumed I had more video game memorabilia, but I really don’t. The one item I had wanted, but was never able to obtain, was one of the life-size Vigors from BioShock Infinite. I recall them selling for an exorbitant amount, but they looked so beautiful. The Murder of Crows Vigor was released first, then Devil’s Kiss. I probably would have lost it if they released Bucking Bronco or Possession. Those two were gorgeous.

(Side note: I just found out they did release both of those Vigor bottles and there are several currently available on ebay. They are both beautiful and stupidly expensive.)

Sure, I have a large collection of video game t-shirts and accessories (Navi earrings, anyone?), but nothing else that is strictly a showpiece.

I know there are a lot of serious collectors out there, so I ask: what do you have in your space? Which item is your favorite? And what is one item you were jonesing for but were never able to obtain?

The one that got away, as it were. 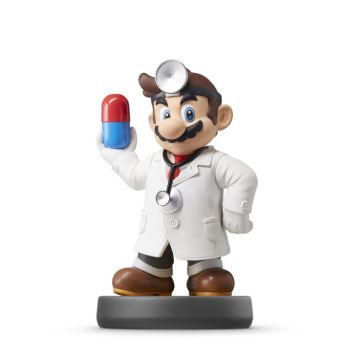 I have a feeling on that last front, I will probably be able to add the Dr. Mario amiibo to the ranks. I don’t have any amiibo, but I adore Dr. Mario, and I’d love to get my hands on one when they release in September.

On that note, have an excellent weekend and I look forward to hearing about your video game memorabilia.