The photo above was the first image I ever took of Cloud. At that time, the animal shelter he was residing in simply referred to him as “Animal # A1304716.” A number I would memorize and enter on the animal shelter website multiple times a day, every day, for a month.

At the time we met, I was a little broken. Now allow me to divert from the direct path of this story for a moment.

There are a handful of people I know who I can accurately communicate with about the magic of the friendbeast connection. My partner. My aunt and uncle. A friend who I met on a freeway. Sure, many people love their creatures, but these folks understand the reverence for the connection. I’m sure there are others out there who do but choose not to express it.

I can’t not express it.

I shy from explaining a history of my previous pup, but she figures in to my mindset in the years prior to Animal # A1304716.

Esmeralda. I adored her. She was a constant friend in a series of years where those were in short supply. When she had to be put to sleep, it crushed me.

I’m already crying. Bear with me.

When she ceased to live, it was the week before Christmas in 2010. The pain didn’t abate. It still hasn’t. I say this without any exaggeration: it is just as hard for me today as it was the day she passed.

I miss her. Deeply.

In late 2013, my partner suggested we volunteer at our local animal shelter. I said I would try. So we signed up for the presentation on becoming volunteers. After we attended, we walked around the shelter.

I told him I wasn’t sure I was going to be able to do this. I reconsidered and said, I could try to volunteer with the rabbits. When I grew up, we had many bunnies, and I felt I could do this without requiring a case of tissues every time we went.

We were accepted as volunteers, and we went each Wednesday. On one of these Wednesdays, I was walking back from the rabbit area and I swear to you I felt my gaze pulled in a completely random direction.

And there was Animal # A1304716. A red and white husky, who looked as depressed as I could imagine.

I knew it would hurt to even remotely connect with him. But I couldn’t not connect with him. I went to the kennel he was in, and knelt down. He put his forehead in my hands, and my immediate reaction to our connection was, “We have to get you out of here.”

I asked about him at the office. It turned out that a handful of huskies (including he) had been brought in. They had been abandoned. None of them were spayed or neutered. There was a waiting period in case they were claimed.

No one claimed them.

Here is where it got tricky. The law here states that each dog must be spayed or neutered before being adopted out. His fellow huskies had their respective surgeries and were adopted. He had a medical complication (later we would find this to be one of many medical issues he has), and his surgery kept getting put off. He was in the shelter twice as long as most other dogs before he would even be allowed to be adopted.

So we kept visiting him. I kept checking his adoption status. Still unavailable.

Now during this time, much was going on internally. Part of me knew we were supposed to adopt him. The rest of me was so afraid of recurring heartbreak that I found every possible issue that could arise and questioned myself on it. My health isn’t good; what if I couldn’t care for him properly? What about not having a yard? What about medical issues? What about? What about? What about?

I questioned myself into oblivion.

My partner is endlessly patient in general, and specifically with me. He waded through all my questions, and always came back to the same solution: everything will work out fine.

He is often correct.

So finally came the day when I was told he had his surgery. This meant the next day he would be available for adoption. It had also come to light in the previous weeks, that we were far from the only set of folks interested in him. I’d even seen other people visiting him.

The shelter had said you could start lining up in the morning before the office opened to wait. At a certain time you could take a number, and the system was first come first served.

So I talked it over with my partner and started trying to figure out how early was early enough. Was 6 A.M.? Was 4 A.M.?

I wouldn’t leave anything to chance, so I said, screw it, I’m going out there at midnight, and I’m waiting all damn night.

And that’s what I did.

In the darkness of the very early morning of March 19th, 2014, just minutes after midnight, I was sitting in front of the gates of the animal shelter. I was trying to make myself very small, as I didn’t want to attract the attention of anyone who could potentially tell me to leave. I was technically trespassing.

I was technically trespassing under a large sign that said, “NO TRESPASSING.”

I may also add that there was a prison next to the shelter, so that was also on my mind at o’dark hundred.

Never the less, I plopped down to wait with a book, my ipod, a bottle of water, and some snacks. I was unprepared for how cold it would get around the 3 o’clock hour, but it didn’t matter. I kept thinking of Animal # A1304716 just inside, knowing we were both outside that night, sending signals that he had a home, he just didn’t know it yet.

Around 4 A.M. another car pulled up (my partner was in our car, sleeping as he had to be at work in the morning), and someone got out and approached me. He asked me if I was there for the husky. I said yes. He asked how long I had been there. I told him since midnight. He looked both relieved and crushed. Relieved, because he said if he had found I got there only a short time before, he would have been kicking himself.

We talked for a bit (he was quite nice) and he gave me his business card before he left, telling me that if anything didn’t work out, to let him know. I said I would.

He left. It started to get lighter. Another couple showed up for a different dog. We got to talking and they were wonderful folks. They saw me shivering and gave me a blanket.

As the time ticked by, more people showed up. Many for the husky. When they found I had already held the first place in line for him, they left. More than one person tried to persuade me to let them adopt him instead. I politely declined.

When the office finally opened so we could take numbers (it wouldn’t technically open for another hour), I was first. I started to get really silly because this was all but a solid conclusion: he would finally have a name and come live with us.

And when that office opened for business, I was right there, ready with everything to adopt him.

He was a little spazzed to finally be freed from his concrete and bars (who wouldn’t be?) and we took him home. I was out of sorts because I’d not slept, eaten only donuts and coffee, and was trying to adjust to another living being in our space.

I know some people say they don’t deal well with change, but I am on the extreme end. I didn’t adapt well at first. It would not be an exaggeration to say the first week had me fairly regularly in tears wondering if I had made a mistake.

I soon realized that there was no mistake.

Cloud is magical. He wants to connect with people. The first time he met a group of people, he spent time with each one. He would sit with one for a bit, connect, then move to the next. Eventually he would come back to me or my partner.

He is a sweet spirit. A silent creature with whimsy in his puppy heart.

He can often be found upside down.

So you see, friends, it was a year ago today that he was brought to his home, our home, and we became a pack.

I love this dog.

He is a life-changer for me.

I am still broken in parts. I suppose I always will be. But there is light in there, and it comes through the cracks, and there is beauty in that.

We don’t know technically how old Cloud is, but he was estimated to be two when we adopted him. We decided to consider his adoption day to be his birthday, so, happy third birthday, Cloud. I’m ever so grateful you were born. While I wish you’d not been abandoned, and that we could have “had” you since you were small and squishy, we are all together now. And it’s pretty f’ing beautiful.

(Below, please find a few of my favorite images of him from his first year with us. I couldn’t find a way to work them into the above story without being disjointed. So here they are, the visual frosting on my writing-cake.)

This is not an uncommon sleeping position for him. That eggplant makes hilarious sounds.

He has catfish whiskers. 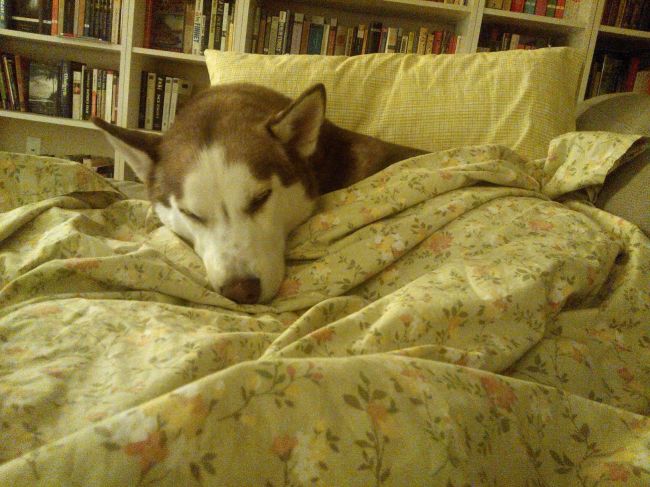 We often take naps together.

This is one of my favorite images of him. It’s representative of how he truly is. And he looks delightfully happy.