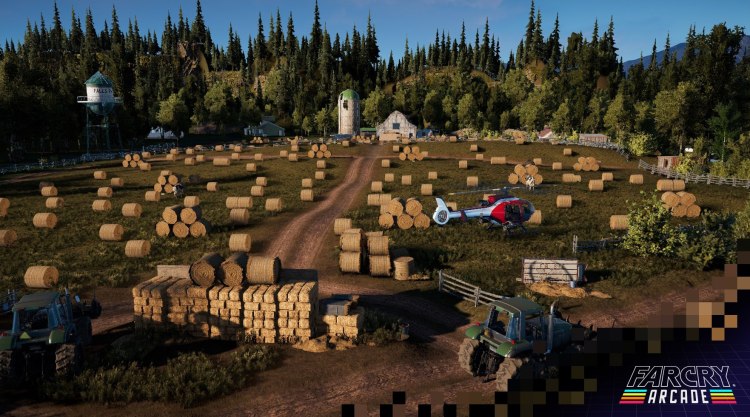 Allow me to say right off the bat that I only ever want games to be as good as they can be. I’ve loved imperfect games, I’ve loved weird games, and I’ve loved a particular Far Cry entry so much it’s likely on my top ten games of all time.

I also want to be as positive as I can be, even if I’m not necessarily enjoying something. Sometimes it takes a while for a game to click with the person playing it, myself included.

That being said, I’m currently not sure what to make of Far Cry 5.

As many of you know, I’ve been the engineer on the hype train for Far Cry 5. I love that the Far Cry series has the potential to be bonkers in a unique way. I love the often inappropriate situations. I love the drug-fueled sequences. I love the bending of reality. And I love the spontaneous, ridiculous moments.

So please, take the following with an abnormally large grain of salt, because I wanted to love this game from the get go.

Having a suddenly silent protagonist after having voiced protagonists for so long is a strange departure. With sometimes lengthy monologues coming at you, it seems strange that your character is mute and never responds. I think it works in some games; I don’t feel it works very well in Far Cry.

The customization options for your charter model are limited at best. With only a handful of options for faces and hair, I feel a bit more variety could be offered up. There should be at least as many face options as there are face and neck tattoos in the game.

The load times are often ridiculously long. With enemies seemingly hitting harder and without the minimap to rely on to find them in the first place (more on this later), deaths aren’t uncommon, especially at the beginning when you are underpowered and low on supplies. Those long loads sap the excitement right from me, especially when I fail out of missions because I’ve been spotted even though no one saw me.

Which takes me to the AI, both of enemies as well as companions.

Let me just say: I love Boomer exactly as much as I was hoping to. He’s adorable, he’s helpful, and he’s a bad*ss on the field. But even he can’t overcome his programming. I can’t tell you how many times he has run straight into a patch of fire, caught fire, then stood there until he “faints.” That just means I also have to run into the fire to revive him (because there’s no friggin’ way I’m not reviving him, no matter what), which means I’m having to use one of my three medkits to heal myself. It’s a waste of resources for something that shouldn’t be happening in the first place.

This is nothing to say of the general jank of the game and enemy AI. I was on a path yesterday (nowhere near an outpost or the like) and the enemies kept spawning at a ridiculous rate. It had to be a glitch. My guns for hire at one point were literally running back and forth for no reason and not fighting the abundance of enemies. One of my guns for hire was driving around me in circles on an ATV while I was fighting, no joke. It was silliness. Not even Far Cry 3, a game from last gen, was this janky.

Another thing that may or may not be a glitch (if it isn’t, good gracious I don’t find it to be a good choice) is when you are going about your open world business, a story mission might just take you hostage and make you play it. The first time this happened I thought it was an accident; one minute I was in a tube looking for a key, the next I was on drugs and being taken to a bunch of bad guys. I would far rather the game allow me to decide when I want to get involved in a longer story mission.

One thing I was optimistic about has left me wanting: the absence of the minimap.

I understand Ubisoft wanted to do away with it so the world would be more immersive, however I feel it has unintended consequences. Yes, I’m looking around more, but I’m also dicking around more because I don’t know where certain things are. I used to be able to look to the minimap to find certain plants to harvest and collectibles in the environment. Without that indicator, it’s sometimes terribly difficult to see those things. They didn’t make interaction-enabled items any more visible (they actually seem a bit less visible than previous entries), and certain icons you can see are white, which often blends into many environments. I thought I would be fine with no minimap, but I’m finding I miss its utility.

One thing I do love about this entry is the optional aspect of hunting. In previous Far Cry games, hunting was necessary to upgrade various items. In Far Cry 5, it is entirely skippable. As someone who hates hurting animals in games, this is a relief to me. Yes, I will defend myself if an animal attacks me first, but I will never go out of my way to shoot an animal in a game. I know it’s all digital and pretend, but it bothers me. I’m so grateful for this change.

Far Cry 3 has one of my favorite soundtracks of all time, and I always look forward to the music in any game I play. I know it’s subjective, but I’m not fond of either the repetitive score or most of the licensed tracks in Far Cry 5. I’m also very unfond of the cult-specific music.

I understand the changes made to the formula are meant to make the gameplay feel emerging but it winds up feeling aimless. I feel no urgency to do anything in the game. The story had so much potential but, in actuality, it feels underrealized. Nearly everything that happens feels accidental, not deliberate.

I realize this all sounds fairly negative. I don’t necessarily mean that to be the case. I think the game is perfectly adequate. Sure, it could be smoother. Sure, it could be more realized, but it’s still mostly enjoyable to play. Do I love it like I wanted to? Not yet.

Do I hope I will still get there? Yes.

I’m about ten hours in so far, and I allot plenty of possibility for my semi-frown to turn upside down. I’m hoping for it, actually. I want to love this game and, right now, that’s the best thing I can say for it.